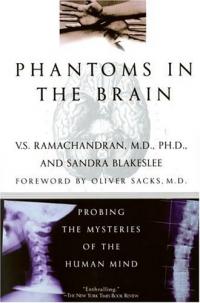 Оглавление
Neuroscientist V.S. Ramachandran is internationally renowned for uncovering answers to the deep and quirky questions of human nature that few scientists have dared to address. His bold insights about the brain are matched only by the stunning simplicity of his experiments — using such low-tech tools as cotton swabs, glasses of water and dime-store mirrors. In Phantoms in the Brain, Dr. Ramachandran recounts how his work with patients who have bizarre neurological disorders has shed new light on the deep architecture of the brain, and what these findings tell us about who we are, how we construct our body image, why we laugh or become depressed, why we may believe in God, how we make decisions, deceive ourselves and dream, perhaps even why we’re so clever at philosophy, music and art. Some of his most notable cases:

• A woman paralyzed on the left side of her body who believes she is lifting a tray of drinks with both hands offers a unique opportunity to test Freud’s theory of denial.

• A man who insists he is talking with God challenges us to ask: Could we be “wired” for religious experience?

• A woman who hallucinates cartoon characters illustrates how, in a sense, we are all hallucinating, all the time.

Dr. Ramachandran’s inspired medical detective work pushes the boundaries of medicine’s last great frontier — the human mind — yielding new and provocative insights into the “big questions” about consciousness and the self.
Книги автора: Phantoms in the Brain

Книга: Phantoms in the Brain

My sojourns into neurology during the last ten years have been fascinating, full of all sorts of unexpected twists and turns as each plot unfolded. My companions during this journey have been my numerous students and colleagues, the many books from which I have drawn inspiration and the images of my old teachers from Cambridge and India still fresh in my mind. In particular I would like to thank the following individuals:

I also thank the University of California, San Diego, and the Center for Brain and Cognition (Center for Human Information Processing: CHIP) for providing a superb academic environment; in a recent survey by the National Research Council, the UCSD campus was ranked number one in the country in neuroscience. The university is also fortunate in having a symbiotic relationship with many neighbors, including the Salk Institute, the Scripps Clinic and the Neuroscience Institute, making La Jolla a mecca for neuroscientists from all over the world.

Many of the investigations I describe in this book were carried out in La Jolla, but I also conduct studies on patients in India during my annual visits there. I thank the Institute of Neurology, Madras General Hospital, and the Tata Institute of Fundamental Research in Bangalore for their hospitality.

Some of the ideas discussed in the book emerged from discussions I had with students and colleagues — Eric Altschuler (experiments on placebos and somatoparaphrenia), Roger Bingham (evolutionary psychology), Francis Crick (consciousness and qualia; the term “zombie” for the how pathway in the parietal lobe), Anthony Deutsch (analogy with talking pig), Ilya Farber (arm movement sensations in a denial patient), Stephen Jay Gould (alerting me to Freud’s idea on scientific revolutions), Richard Gregory (qualia, filling in and mirrors), Laxmi Hariharan (pediatric diagnosis), Mark Hauser (consciousness of bees), William Hirstein (with whom an early draft of Chapter 12 was written), Ardon Lyon (blind spots), John Pettigrew (talent as a marker of brain size), Bob Rafael (somatoparaphrenia), Diane Rogers-Ramachandran (the mock injection experiment), Alan Snyder (similarities between Nadia’s horses and those of da Vinci in the section on savant syndrome) and Christopher Wills (who helped with an early draft of Chapter 5).

I am also grateful to my agent, John Brockman, president of the EDGE Foundation, not only for urging me to write this book but also for doing everything he has to help bridge the “two cultures”. Like the Earl of Bridgewater, who commissioned many popular science books in Victorian England, Brockman has been a potent force in the dissemination of science in the latter part of this century. Thanks also to Sandra Blakeslee and Toni Sciarra, who kept goading me to finish this project and helped make the book accessible to a wider readership.

Finally, I owe a very important debt to my patients, who often sat through long hours of tedious testing, many of them as intensely curious about their predicament as I was. I have sometimes learned more from chatting with them or reading their letters than I have from my medical colleagues at conferences.